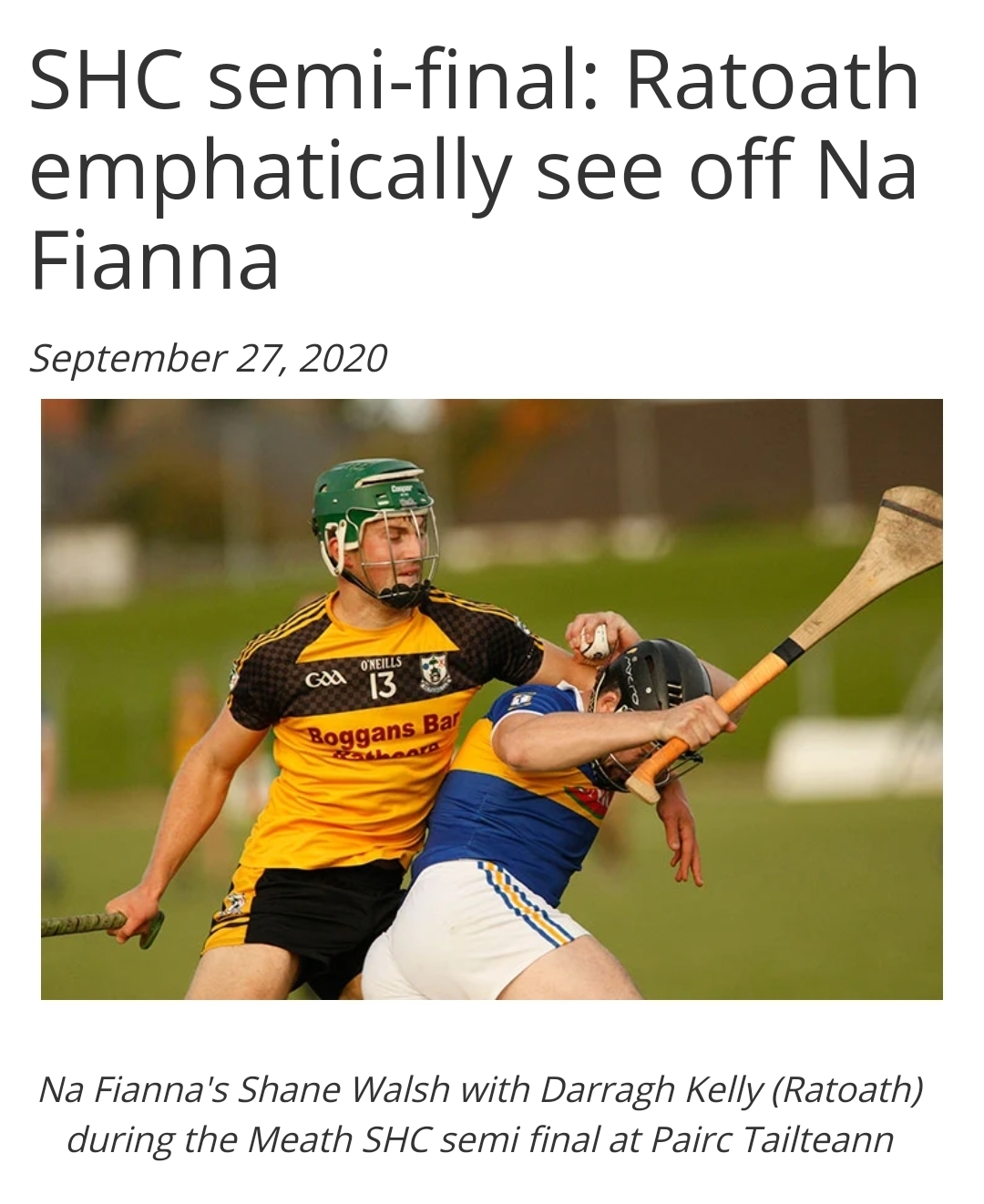 Ratoath were too strong for Na Fianna at Paircc Tailteann on Sunday in the second SHC semi-final finishing with 22 points to spare.

Eight different players contributed to Ratoath's tally in a fixture that had flatlined by the first water break. The fixture had echoes of Ratoath's big win over holders Kildalkey in the round robin phase.

On the evidence presented over the weekend, Ratoath will go into their final meeting with Trim as overwhelming favourites in their bid to take the title for the first time since 1963.

Ratoath all but secured their final place with 14 first-half scores, before adding 12 second-half points.

An early Barry Slevin free barely dented Ratoath's considerable armoury. It was countered by a Padraig O'Hanrahan 65 before Cian Rogers' excellent point gave the strong favourites the lead they would take to the finish.

Cian Rogers' well-struck ninth minute goal was the mainstay of their opening quarter tally and they reached the water break leading by 1-4 to 0-1.The last score in that sequence was a fine Gavin McGowan point.

From the resumption, Ratoath picked off five points in seven minutes. An Ethan Devine point temporarily interupted the sequence.

Gavin McGowan's 26th minute goal left the adjacent scoreboard reading 2-9 to 0-3. Ratoath registered some excellent scores like Darragh Kelly's 27th minute effort which was followed by Tom Fadden point, which was preceeded by a fine catch.

Ahead by 2-12 to 0-3 at the interval, Ratoath wasted little time in adding to their tally in the second-half with Jack McGowan pointing.

Ratoath were content to count their points as Peter Slevin (two) and Sean Martin replied for Na Fianna. Peter Slevin (free) and Shane Walsh completed the total for the team representing Enfield and Baconstown.

Ratoath 'keeper Gearoid Crowley did well to stop Sean Martin's 57th minute goal attempt for Na Fianna. The team in yellow and black pressed to the finish but found it hard to unhinge their opponents resolute rearguard.

Trim edged Ratoath out of last year's SHC by a single point at the quarter-final stage. The smart money says it could be a different result in Sunday week's final.

One disappointing feature of the fixture was the difficulty in identifying players on both sides with Na Fianna jerseys causing more problems in this regard.